About Being Married to a Muslim Somali Prince


Lots of people ask me what it's like being married to a Muslim- especially a tall black man from Somalia, since people where I grew up just didn't have access to foreigners. So for those of you who are curious or just remotely interested...here's a little information.

Abdulhamid Mohamed Ali Daar is his full name. His Dad was Mohamed Ali Daar and the middle name is always the father's first name. So Omar is Omar Abdulhamid Ali. In Somali circles, this was a pretty important family. There are tribes in Somalia- even today. The eldest born son in any family has a big responsibility to ensuring the family has what they need. His family is royalty and Abdulhamid (we call him Abdul for short) is a prince. Let me first say, there is no castle, no tiara, no riches.  He is often asked to give away brides to represent the family and it's a great honor. He has 2 brothers who are also Abduls- Abdulmalik and Abdulfatah. When we call them all Abdul at family gatherings it's kind of crazy so we have to use the formal names. Their father was the equivalent to the US secretary of state and held other political jobs so they lived a very comfortable lifestyle in a villa in Mogadishu with servants, chauffeurs, and nannies. Abdul and his older sisters attended Italian boarding school. It's odd that the teachers were catholic but they encouraged only Islamic religious principles. His younger brothers attended school taught in Arabic.  They are all well educated. He has 3 sisters too and among the 6 children there are 2 doctors, an actuary (analyzes risk management), an engineer, a chemist and a business major. 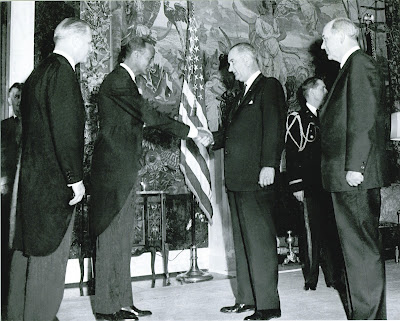 Abdul's parents died before I met him but his mother was the rock of the family. His father was put in prison for political reasons for several years when the government was overthrown and she was forced to find a way to support the family. By 1991 the country was in civil war and all of them emigrated to the US with Abdul being the first to come. He came to Marquette University in Milwaukee to learn civil engineering. He didn't speak any English when he arrived but spoke Italian fluently. Fortunately he was a quick learner. He worked for the Dept. of Transportation for many years and that is where I met him on a diversity committee. Now he runs a successful engineering company, Daar Engineering, in downtown Milwaukee and has ongoing work here in WI and in Iraq.

Abdul is a practicing Muslim. I didn't have any idea what that meant but for those who strictly follow their religions, it dictates the principles which guide your life and bring spirituality. He prays at least 5 times a day. He has a ritual where he washes his hands, face and feet. Then he rolls out a prayer rug and says a prayer in Arabic according to specific time guidelines. So virtually all Muslims should be praying about the same time each day. There is a lot of kneeling, putting the head to the floor, and somewhat of a programmed movement. This kind of dictates our activities. He likes to be at home to pray so we center our outings around the prayer times. If we are out though he isn't shy about praying at a park, in a bathroom, office, whatever. He does it to please God and not to make others feel uncomfortable...although they do.

When we went on our first "date" I had no idea it was going to be a date. We had dinner and I ordered wine. Then I learned that Muslims don't drink alchohol or eat pork. Otherwise their food preferences aren't too much different than ours. We never keep alcohol or pork in the house, unless I'm cooking with wine or beer- that is allowed since the alcohol dissipates. We had dinner a few times and then he nervously explained that Muslims don't "date" but we could get to know each other and if we were both interested in pursuing a long term relationship there would be a marriage almost immediately. So we had the first dinner in May and had the marriage in August- very quick. During that short courtship we only met with each other in public places. We caused quite a stir among some of his Somali friends who called me an infidel (someone who doesn't believe in God) and wondered why he was taking a woman in public with whom he was not married. Aaah! The scandal! Many Muslim marriages are arranged and more than the typical Christian marriage survive the test of time. When you have a whole family looking into a person's credentials and lifestyle, you are bound to find a better match. I never really stopped to examine whether this was a good marriage for me as I felt that God was leading me down this path. If you pray, you have to expect your prayers will be answered...though not always as you expect! I know that with Abdul's strong beliefs, it would at least ensure he would always be driven by unfaltering religious principles and I believe he always tells the truth and is trustworthy. 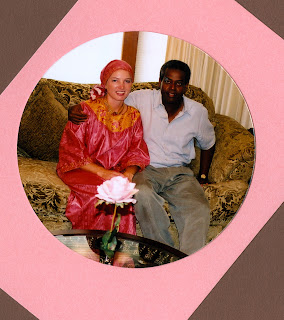 The wedding was like nothing I had ever seen before. Technically I didn't have to be there. The men gather in one room with the sheikh (priest or minister) and he explains the duties of a husband. I have a male represent me called a "wally" but I'm not sure of the actual spelling. The women stay separately and when the sheikh is happy that the duties are understood we all eat...but not together. I invited my sister and niece Margaret to join me that day and then there were his sisters and we did it at the home his 2 sisters shared. To celebrate a special event like a wedding, it is customary to buy a goat or sheep and have a party. We had a small catered dinner at his sister's place but he sent money to Somalia to buy several goats which were slaughtered and fed his distant cousins. I've been to a couple of other weddings and have included a few photos of the typical dress and henna that is customary for women to wear on their arms and sometimes feet.

So now life isn't much different than most American families except we entertain many foreigners. If I go to mosque with him, the women are in a separate room or floor than the men and I have to wear long skirt or pants and cover my head. He goes to mosque every Friday at 1- that's their traditional holy day. He fasts- no food or drink from sunrise to sunset- for one month every year. He's been to Saudi Arabia for the religious pilgrimage at Mecca with tens of thousands of people- an obligation for all Muslims who can afford to go. I've just about given up on alcohol or pork- I now realize how it's such a social part of our culture...drinking I mean. I never was big drinker but once in awhile I see that someone says they are going out for margaritas and I recall the past social life I had. Now we meet for meals or coffee.

When we travel, we always have to plan on extra time at airports. When you have a Muslim name, you can bet on getting detained once in awhile. Unfortunately it's even worse with Omar. He's on the terrorist list or at least someone with his name. I often question the common sense of security personnel who would detain a 6 yr. old with down syndrome for being a terrorist. Omar has to be raised with Islam as his religion, so he is called a Muslim. All children follow the father's religion. And Muslim men can marry Jews, Christians, and Muslims- anyone who believes in one God...but Muslim women can only marry Muslim men.