The Future for African Wildlife and Safaris- Chaminuka Lodge, Zambia

African wild life are at risk due to poaching, human encroachment into their native lands, and weather phenomena that create droughts and flooding. It's no wonder that the numbers of animals on the endangered list are growing. As these beautiful creatures move about, just trying to survive, they are trapped or shot because they've been eating someone's garden veggies or attacking domestic animals.  Or they are relocated to another country to be placed in a zoo, like Zimbabwe did for elephants last year.  It's difficult to find balance. Governments across Africa have created national parks to protect and provide larger expanses, but they are rarely maintained at a level that leaves everyone happy.  Nnaemeka Ugochukwu writes about this at her blog Eco Warrior Princess. If a park isn't kept up, people won't visit and then revenues necessary for maintenance disappear.

When I visited Zambia in December, I learned about another model, which I believe could be a future path for African wildlife. There's a luxury resort near Lusaka which provides a safe haven for wildlife privately. Chaminuka Lodge, created as a family retreat by Andrew Sardanis in 1978, was opened to the public 20 years later and continues to grow. Andrew was born and educated in colonial Cyprus and worked as a journalist and spent his life in Northern Rhodesia, later Zambia, where he developed his business interests which spread over 31 African countries. He is a noted entrepreneur, history buff and author of several books.

Chaminuka, which functions more like a village, features some of our planet's most majestic wildlife. The estate is home to some 150 families, which includes a farm and cheese factory. There are 30 suites and 4 villas for guests. We didn't stay overnight, but did a day trip from the city. There are many activities to choose at this remote destination, which requires a drive on a washboard dirt road to get there. Once there, you'll certainly believe you've found paradise. At least I did.

We arrived at lunch time and in spite of not calling ahead to reserve a space, we were seated at a shady table overlooking the pool and a vast green space. I would recommend making a reservation and going even earlier to take full advantage of all that is on offer. There was a delicious lunch buffet to one side of the main lodge, which I learned was created with food locally sourced. On the other side were delectable desserts and a cheese table. The woman who crafted the dishes was there serving. 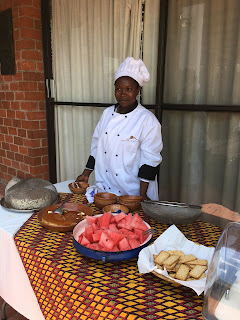 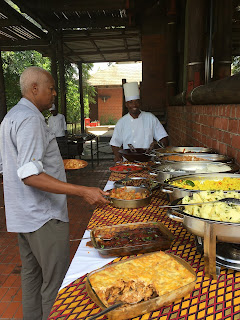 After lunch, we took a boat ride across one of the small lakes on the property to see birds and water buck. According to the Chaminuka instagram page, the private wildlife park has 7000 animals and 500 species of birds. I enjoyed photographing the birds, but Omar and the Chinese tourists sharing our adventure really enjoyed speed boating.

Next up, a game drive through the 42 square kilometers to see giraffes, zebra, ostrich, and other free roaming animals. I was surprised by how many animals we were able to see and photograph.  This is certainly a wonderful destination for photographers. We boarded an open safari vehicle with a trained wildlife guide.   A fenced area was home for lions and cheetah. Elephants were grazing in a field. They are brought out during the day but put in a shelter at night. One advantage to being in a small private reserve was the lack of other vehicles. I have been other places on safari where there were traffic jams. I felt the guides were certainly up to the task of offering relevant information about the animals as well as the reserve's history.


I thought this was a great experience, even if it was a private game reserve.  The animals appeared healthy and it seems to be a sustainable model, using private funds to manage the ecosystem. If we are in the area again, I'd like to stay on the grounds to enjoy the night sky. One of the guests mentioned that there were layers and layers of stars. Though I know some people might feel this is not the real thing, I felt it was almost like our safari at Maasai Mara, though on a smaller scale, making it perfect for a day trip.
Labels: africa africa for kids africa travel Safari