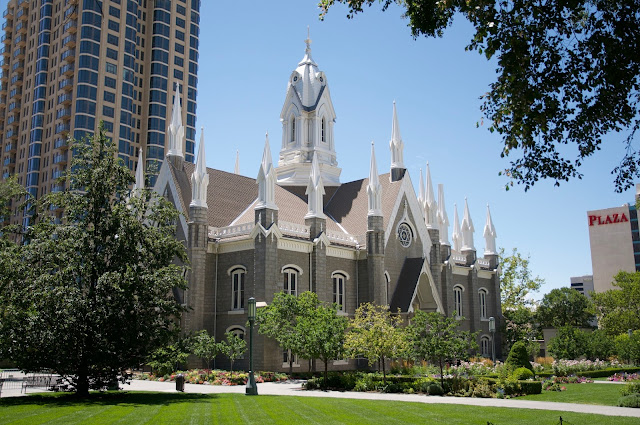 Sometimes you end up with a long layover at one of the few airports that offer a bonus deal of a city tour. Salt Lake City is one of those gems. We recently had a long layover there, arriving at 8:30 AM and departing at 3:30 PM. Because we were changing airlines, we had to drag our bags around the terminal for a few hours because Southwest has a 4 hour rule, meaning that they accept your checked bags no earlier than 4 hours before scheduled departure. The terminal used to have lockers, but those were removed some time after 9/11. It worked out OK though we would have preferred to have more time outside the airport. We still had to take our carry-on bags with us to the city.

There is a free shuttle service to Temple Square, departing every half hour, which includes a narrated tour by volunteers from the Mormon Church. You can stop by the information counter in terminal 1 or 2 to get a brochure on the service, which includes the seasonal schedule. Or just board the van at terminal 1 by door 1A or terminal 2 at door 13. You can't miss the van because it has an advertising wrap covering the surface. You must have at least a 2 hour layover. Plan on the ride to the square taking 30 minutes. 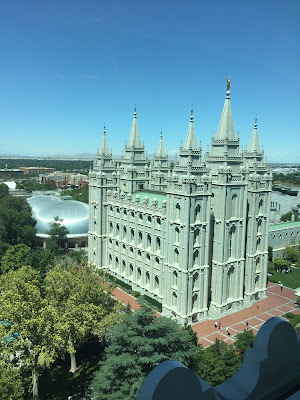 The square has quite a bit to see. I had no idea. I heard the tabernacle choir before on television, but with the right timing, you might hear them sing at a practice or performance on a Sunday morning. We were lucky to hear the organ recital, though photos were not allowed. The tabernacle is open to everyone, while the temple only admits members of the LDS church.

Brides seemed to be everywhere on Saturday morning. The lovely gardens make for some memorable pictures and family clusters were taking advantage of that.  There are thousands of annuals planted in every available space. It not only looks beautiful. It smells pretty nice too. Reflecting pools and fountains break up the flowerbeds. 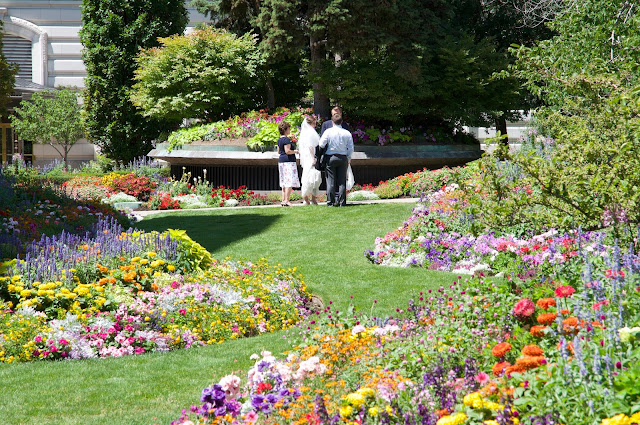 We didn't have a lot of time, but we managed a tour at the former home of Brigham Young, called the Beehive House. It sits next to the Lion House where up to 12 wives and 54 children are believed to have lived. The young ladies giving the tour were both passionate and knowledgeable about the history of the home, Brigham Young's life, and details about the LDS church. They revealed a secret stairway, talked about the red lamp used to indicate that Brigham Young was available for counsel and offered supposition about how it might have been to share a house with so many people. 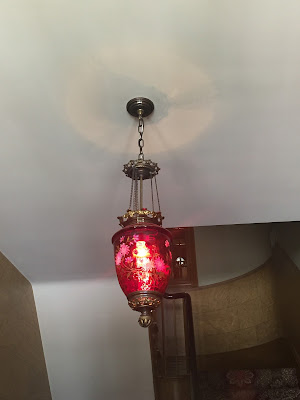 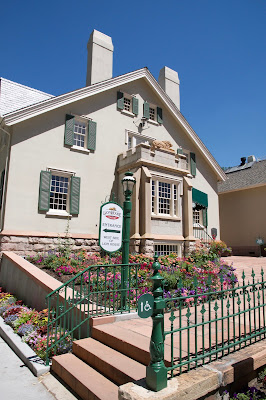 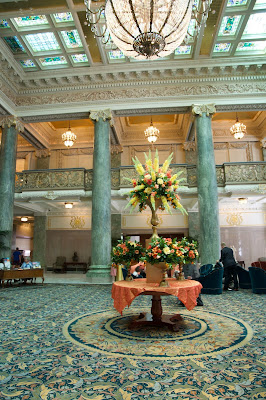 We stopped at the former hotel- now Nauvoo Cafe in the lower level of Joseph Smith Memorial Building. It's a stunning, refurbished high rise, complete with chandeliers. If you ride the elevators to the tenth floor, you get a great view of the temple out the window. We were offered tours twice by volunteers sitting in the lounge area.

Other buildings include the museum of church history and art, a family history library where you can get assistance in doing family geneological research, the church history library, relief society building, assembly hall, and the enormous conference center with a green roof that is quite impressive.  For more information about what to see or do, check the Temple Square website. If you're a photographer, there is even a guide on where to find the best shots.
Labels: airport layover Road Trip USA
Location: Salt Lake City, UT, USA