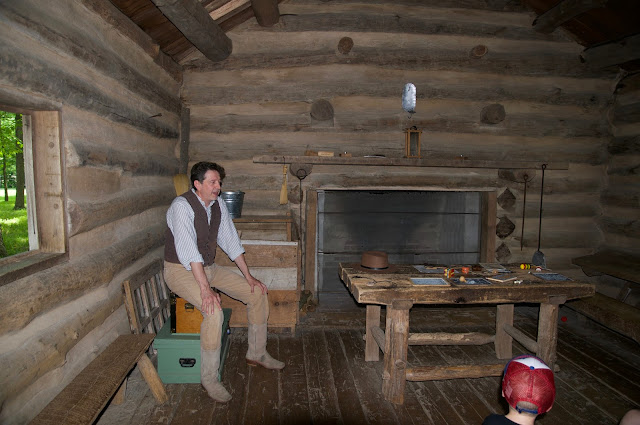 I grew up in Illinois and enjoyed the few occasions we went to Springfield to see the Lincoln home and tomb. When my older kids were younger, I made the effort to bring them to New Salem, hoping they'd enjoy the log cabins and people dressed as early pioneers. Now it was Omar's turn. We only had the weekend, so we had to choose carefully to see the best places.  There are three that I think are the most family friendly.

The first place, where we spent half a day, was New Salem.  It's a town that has been rebuilt using the original foundations. While in his twenties, the future U.S. President made his living in this frontier village as a boatman, soldier in the Black Hawk War, general store owner, postmaster, surveyor, and rail splitter, and was first elected to the Illinois General Assembly. It includes these buildings as well as a school house. There is no set admission, but donations are encouraged.

When I'd been there before, we saw many more actors/volunteers, however it was a hot day and we only met the "school teacher," who was male and full of great stories about how it would have been back in the 1830s when Lincoln lived there. He had a small fire going in the huge fireplace and said it provided a draft which cooled off the cabin and took away the humidity.  Who would have known? He explained that Illinois was really the "wild west" of the day, yet it was a hub for gathering and early trade.

With a small museum and a film about Lincoln playing in the theatre all day, you can easily spend 45 minutes in the visitor center.  We even bought tickets for the evening outdoor performance behind this building, where we saw a great kids' production of Aladdin Jr. They provided bug spray because the mosquitoes were out in force. There was also a concession selling snacks and drinks. It turned out to be a fun evening. 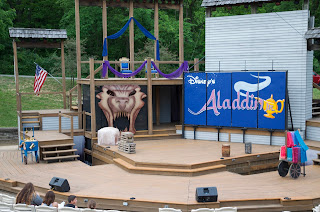 The Lincoln Museum is really fun for families, with lots of interactive exhibits and wax figures.  Smaller kids can dress up in costumes and play with toys. Others will enjoy the movies and information on well designed displays.  Omar got a bit upset at seeing the slave market wax figures, as well as Lincolns doting on their bed ridden son just before his death, but otherwise, everything is tame by comparison. They offered a military discount, which I always like. Though there is no flash photography, you can take photos.  We ended up buying a t-shirt and Lincoln hat in the gift shop. I thought everything was pretty reasonably priced.

It was funny that we later ran into a Lincoln look-alike at Cozy Dog Diner and Omar wore his hat with Abe. Turned out to be a perfect photo op.  The chamber is doing a promotion this summer where you can look for Lincoln at local businesses, and I was told more information will be up on the Visit Springfield Facebook page. Be sure to check out the participating places doing the History Comes Alive Program too, which runs through August 13. 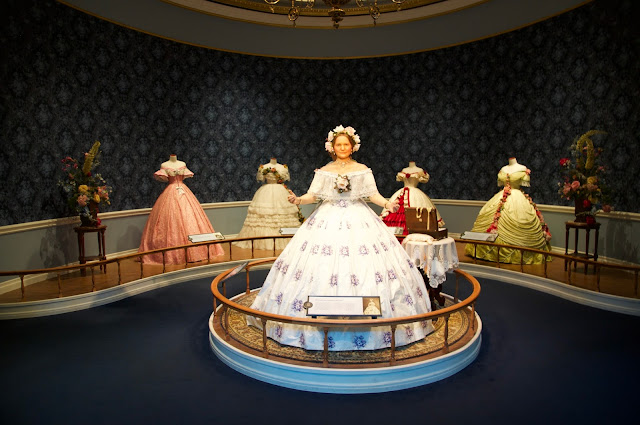 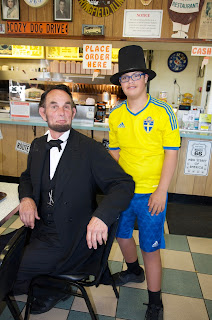 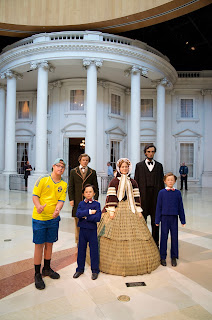 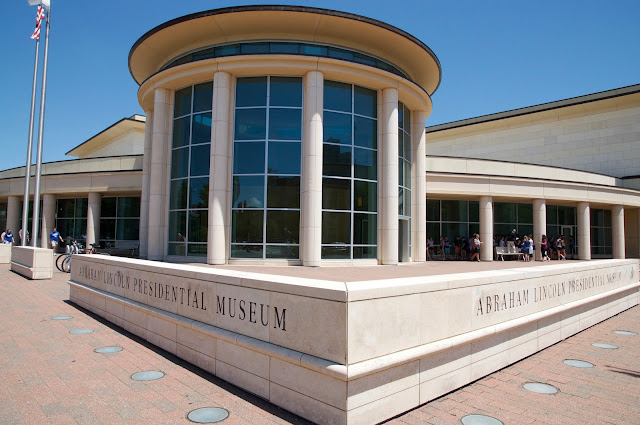 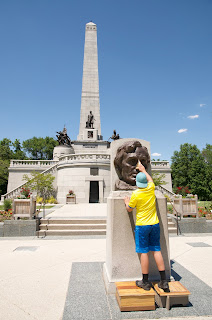 Our last stop was the Lincoln tomb where most of the family is buried, except for Robert who is buried at Arlington Cemetery. From the parking lot and from a distance you can see the monument, but the tomb is inside the monument, using the front door. When we visited, there were several tour groups so a narrator was giving a talk about Lincoln and his entombment, but I'm not sure if someone is there every day.

You walk through a corridor with bronze statues depicting different times in Lincoln's life.  It's very nicely done, with nothing scary. Outside was a bust of Lincoln with a stepstool in front. It's thought to be good luck to rub his nose. 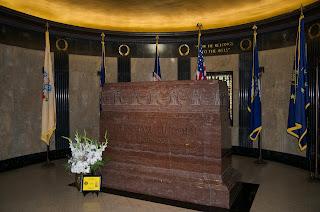